For 2018, the Learning and Teaching Support Unit created a student induction treasure hunt for newly arrived first year students in the School of Arts and Humanities, using Microsoft Office 365 Forms. The treasure hunt involved students working in small groups, using one smartphone between them to answer a series of multiple choice questions designed to help orient them during freshers week at the university.
Specific aims were to help students to find useful services such as the library and student support services, introduce them to sites of cultural interest in Nottingham, and to help them to make friends with other people on their course.

Forms is a part of Office 365, a tool supported by NTU. It is primarily designed as a quiz and data gathering tool. For our purposes we wanted an application that enabled us to ask students questions with a basic level of interaction, and the ability to guide students around specific geographic areas, from one location to another on the treasure hunt. We also needed something that was free to use and required minimal development time.

We picked Forms because it is free for us to use as part of NTU’s Office 365 license, and allowed for quick development of an application that would display well on mobile devices, with particular emphasis on working well on smartphones. The potential for quick development comes at the price of limited functionality within Forms, so some creativity was needed in terms of how we used Forms to create a suitable end product.

Also, we initially hoped to incorporate some form of  interactive mapping (such as Google Maps) to guide students using their smartphones from one point to the next on the hunt. However, it was not possible to incorporate this type of feature with the limited time available, so static images of local street level maps were added to individual questions where possible, along with detailed descriptive text, as shown in the screenshot below: 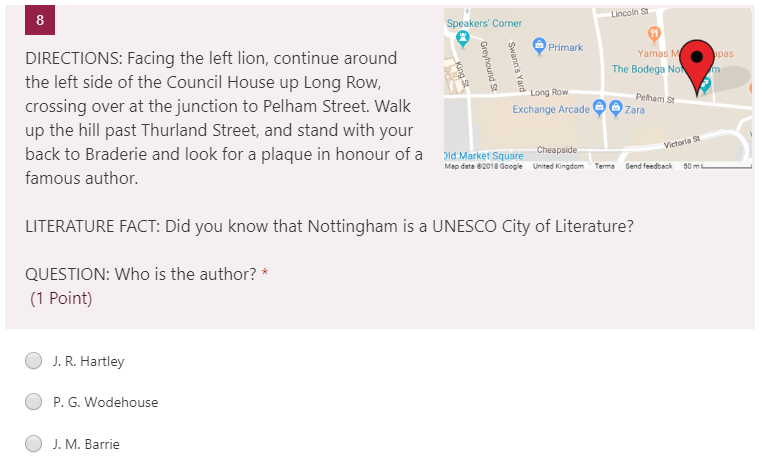 Answers can be quickly reviewed using the Responses tool in Forms, or in more depth by downloading data for use in Excel. In total, 98 students took part in the treasure hunt, with 8 students in two groups winning the prize of a free NTU T-shirt for correctly answering the highest number of questions.

A followup feedback survey of students indicated that the treasure hunt has been successful in meeting its key goals. Open comments in the feedback indicated that it had successfully enabled students to discover key services on campus, explore the city of Nottingham, and to get to know fellow students.

No problems with the use of technology were reported, although one student did suggest that the hunt, in its current form “wasn’t interactive enough”. This may be a fair reflection of the basic features available using Forms, when judged against the expectations that current undergraduate students may have of technology.

Nonetheless, our use of Forms shows that it is more than a simple survey and quizzing tool. We stretched it to the limit of what it could do, with the rapid development of a basic web application optimised for use on mobile devices by a significant cohort of students. It is worth noting that Forms is actively being developed by Microsoft, and that additional features that expand it’s capabilities may be available in the near future. Because of this, and our successful use of Forms with this project, we will consider using it again for other projects, which could include subject specific tours of the city of Nottingham.